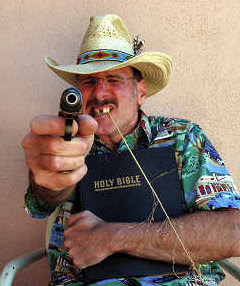 Oklahoma Teabaggers To Form Militia To Defend Against The Federal Government Oklahoma teabaggers are working with politicians to form a state recognized volunteer militia to defend themselves against the federal government. Just in case, you know, somebody tries to make them obey the tyrannical health care reform bill.

Frustrated by recent political setbacks, tea party leaders and some conservative members of the Oklahoma Legislature say they would like to create a new volunteer militia to help defend against what they believe are improper federal infringements on state sovereignty. Tea party movement leaders say they’ve discussed the idea with several supportive lawmakers and hope to get legislation next year to recognize a new volunteer force. They say the unit would not resemble militia groups that have been raided for allegedly plotting attacks on law enforcement officers. “Is it scary? It sure is,” said tea party leader Al Gerhart of Oklahoma City, who heads an umbrella group of tea party factions called the Oklahoma Constitutional Alliance. “But when do the states stop rolling over for the federal government?”

Critics point out that the National Guard already exists as a state-level military force. Completely related to this whack story, the 15th anniversary of the bombing of Oklahoma City’s federal building is this Monday.