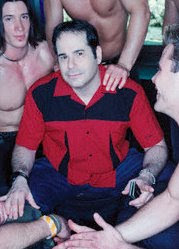 Berkley became a dominant force in Manhattan nightlife twenty years ago, when as the longtime promoter of Chelsea’s famed Limelight disco, he and business partner Matthew Bank founded Homo Xtra, a folded newsletter guide to parties and nightclubs. (And an essential list of must-dos that I was never without when visiting NYC.) Later Homo Xtra morphed into HX Magazine, a glossy weekly whose high production values and titillating cover photos influenced similar gay bar guides around the world. Avalon Media, which owned a stake in HX Media, was forced into receivership by its creditors in February 2009. Several months later, HX Magazine was sold to competing NYC nightlife guide Next Magazine, who shortly afterwards ceased its publication. Two days after the sale of HX, the New York Blade shut down as well.

In 2001, when he was probably at the height of his influence on Manhattan’s gay nightlife, New York Magazine wrote a frank, but fascinating profile on Berkley. An excerpt:

Scratch a gay party promoter and more often than not you’ll find a fledgling political activist; Berkley’s no exception. Especially when it comes to Mayor Giuliani’s relentless war on the city’s nightclubs: “We’re living in Nazi Germany done by Disney right now.” He’s told Gatien that he’d be willing to do events at the Limelight free, because “if that club stays open one day longer than Giuliani’s term, we’ve won.” Over the years, Berkley’s served on his community board, coordinated Heritage of Pride’s nineteenth and twentieth anniversaries, and donated hundreds of thousands of dollars to gay charities. Even HX was conceived as a political statement: “I used to sit in on act-up’s fund-raising meetings every weekend; that’s where I met Matthew Bank. It was 1990, and at the time, Outweek was more or less the only gay publication — Matthew and I used to call it The New York Native Medical Journal, because every week, it was all about dying. There was nothing about what else was going on in the city. That’s how we came up with the idea for HX, as an alternative to that.”

UPDATE: Berkley’s former business partner, Matthew Bank, sends the following message: “I am truly saddened by the passing of my dear friend and former business partner Marc Berkley. His creative spirit and boundless energy helped make New York gay nightlife a shamefully good time for what seems like forever. Working with him to create HX was a grand adventure that I will relish for the rest of my life. I’ll miss him terribly.”