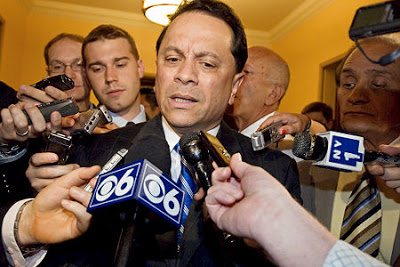 NY state Sen. Pedro Espada has been charged with embezzling $14M from a nonprofit he created. Last summer Espada upended state politics when he abruptly crossed the aisle and became a Republican in an outrageous bid to seize the Senate leadership post. According to the charges, Espada stole federal Medicaid funding meant to provide health care to the impoverished residents of the Bronx.

Embattled Bronx politico Pedro Espada Jr. looted a whopping $14 million over the past five years from a non-profit that he runs — including giving himself a $9 million severance package, paying for family vacations to Puerto Rico and hefty bills at sushi restaurants, Attorney General Andrew Cuomo’s office revealed today. In a lawsuit filed in Manhattan Supreme Court, Cuomo claims Espada diverted charitable assets connected to the Bronx-based Soundview HealthCare Network and used the money for himself, his family and his political operation. Cuomo said Soundview, which relies heavily on Medicaid dollars with the aim of providing healthcare to poor Bronx residents, was Espada’s personal and political piggy bank. “Taxpayer money was given to this not-for-profit to provide healthcare services to underprivileged patients, but our investigation has found the funds flowed into the pockets of Senator Espada and his supporters,” he said.

And that Bronx apartment that Espada claimed to live in so that he could be eligible in that Senate district? Paid for by his “non-profit.” Espada actually lives in a luxurious mansion in Westchester County. (Espada eventually did vote for New York’s failed marriage equality bill, a vote that was long delayed thanks to his month-long lockdown of the Senate.)