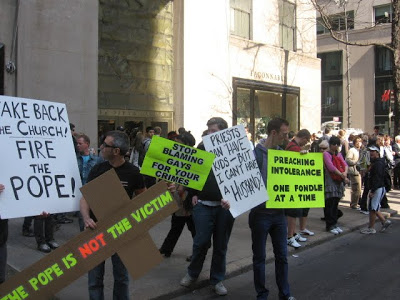 About eight gay male demonstrators showed up to picket St. Patrick’s over the Pope’s continued refusal to accept his responsibility for the abuse crisis and the tendency of his defenders to blame the news media and gay people for the scandal. This week, Fifth Avenue was filled with Easter Paraders, many taking pictures of the demonstrators. When Archbishop Dolan’s procession got to the front of the cathedral before entering for services, the demonstrators shouted “Shame!” repeatedly. After the doors of the church closed and the shouts died down, the Easter Paraders gave a sustained ovation to the demonstrators.

RELATED: A larger silent protest took place on Good Friday, apparently without gay involvement. The below YouTuber found their message “offensive.” From the clip description:

On April 2, 2010, for at least three hours on Holy Friday, some familiar protestors came out with the clear intention of offending all who passed-by St. Patrick’s Cathedral. Easter. Good Friday…For them nothing is sacred. Certainly not Good Friday since those who came to worship were handed florescent orange flyers with the heading, “Clergy Sexual Abuse”. Wonder if this same crowd will come out to save our most vulnerable from abortion. Will they demand an end to the murder of their fellow Christians in Nigeria? Highly unlikely. Since they were protesting in-front of the Cathedral on Palm Sunday, one can safely assume they will return on Easter. Sadly, the police presence was noticeably non-chalant. This group claims to be faithful…to what, one should ask….