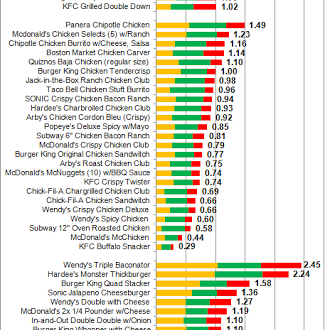 Stats guru Nate Silver takes a look at KFC’s infamous Double Down versus other fast food fare. On his chart above, the Double Down is the benchmark by which other items are compared.

I’ve created an index based on the amount of fat, sodium and cholesterol that the Double Down and a variety of comparable sandwiches contain as a portion of the USDA daily allowance. (In the fat category, saturated fats are counted double and trans-fats are counted triple.) The index is scaled such that the Original Recipe version of the sandwich receives a score of 1.00, a measure of gluttony that will hereafter be known as The Double Down (DD).**

By this measure, the Double Down is indeed quite unhealthy, but some other sandwiches are just as bad. The Burger King Chicken Tendercrisp (1.00 DDs), which has less cholesterol but more fat and sodium, is comparably unhealthy to the Double Down on balance. The chicken ranch sandwiches from Sonic (0.94 DDs) and Jack-in-the-Box (0.98 DDs) are close. And surprisingly, some sandwiches from “fast casual” restaurants that have a reputation for healthy food do even worse. Panera’s Chipotle Chicken checks in at 1.49 DD’s — it has almost 50 percent more bad stuff than the Double Down — and Boston Market’s Chicken Carver at 1.14. So do some products that stretch the definition of “sandwich”. A chicken burrito from Chipotle with rice, black beans, cheese and corn salsa will cost you 1.16 Double Downs: load it up with sour cream, guacamole, and picante salsa as well and you’re up to 1.69. A pack of five McDonald’s Chicken Selects with a side of ranch sauce is worth 1.23 Double Downs.

Silver concludes that since the Double Down isn’t as filling as other items near it on the chart, one might actually want a second serving, making it “the closest thing to pure junk food of any ‘sandwich’ being marketed today.