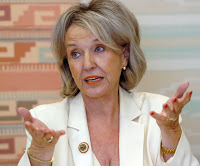 Arizona Gov. Jan Brewer signed into law the nation’s toughest legislation against illegal immigration Friday, a sweeping measure that supporters said would take handcuffs off police but which President Barack Obama said could violate people’s civil rights. The bill, sent to the Republican governor by the GOP-led Legislature, would make it a crime under state law to be in the country illegally. It would also require local police officers to question people about their immigration status if there is reason to suspect they are illegal immigrants. Brewer, who faces a tough election battle and growing anger in the state over illegal immigrants, said the law “protects every Arizona citizen,” and said the state must act because the federal government has failed.

President Obama has vowed that the federal government will look at ways to overturn the bill on constitutional grounds.