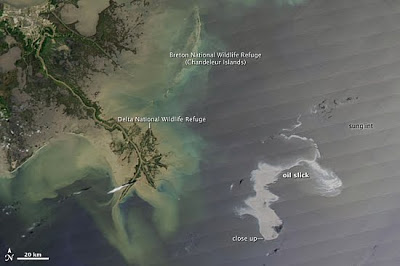 Louisiana-based shrimp fishermen have filed an economics damages suit against British Petroleum, Halliburton, and the owners of the oil rig that has caused one of the greatest environmental disasters in recent memory.

The lawsuit was filed late on Wednesday in U.S. District Court in New Orleans as London-based BP and the U.S. Coast Guard fought to contain a massive oil slick expected to hit the Gulf Coast on Friday. The suit was filed on behalf of two commercial shrimp fishermen named in the suit, and all other coastal Louisiana residents whose livelihoods are threatened by the spill. The Coast Guard estimates that 5,000 barrels (210,000 gallons) of crude oil a day is gushing from the sea floor where the blowout occurred, and authorities have said it could take weeks to cap the leak as BP mounts what it calls the largest oil spill containment operation in history. The suit names as defendants BP, which holds the lease to the offshore well; Swiss-based Transocean Ltd, owner of the Deepwater Horizon drilling platform that exploded in flames on April 20 and collapsed two days later; and Halliburton Energy Services, which the suit says was engaging in cementing operations of the well and well cap.

Yesterday the Coast Guard began burning off the oil in an attempt to reduce the amount that reaches the fragile waters of the Mississippi delta.