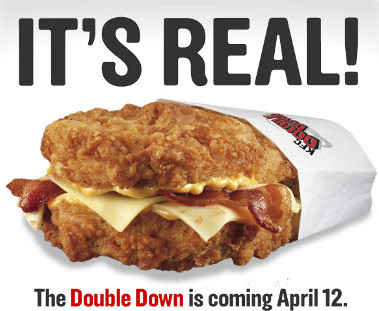 KFC Will Kill Us All Consumerist reports that KFC’s mythical Double Down is no longer mythical.

For those coming late to the story, it’s bacon and cheese sandwiched between two pieces of fried chicken. And now, many months later, I’ll finally be able to get my hands on one. KFC announced the decision to go live with the Double Down yesterday, but we weren’t sure they weren’t playing a April Fools gag. But no, they truly are going nationwide with the delicacy on April 12. The sandwich will be available in two forms. The Original Recipe sandwich will set you back about 540 calories, 32g of fat and 1380mg of sodium. The not-as-bad-for-you Grilled Double Down totals 460 calories, 23g of fat and 1430mg of sodium.

I promise I’ll only have ONE. Just so I can say I did.

Previous Vatican Priest: Catholics Are Being Persecuted Like The Jews
Next Rock For Equality Named Finalist In YouTube DoGooder Video Contest