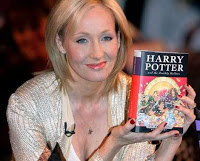 Unlike many of Britain’s uber-wealthy, Harry Potter author J.K. Rowling isn’t dodging her taxes by setting up a home in another country.

I chose to remain a domiciled taxpayer for a couple of reasons. The main one was that I wanted my children to grow up where I grew up, to have proper roots in a culture as old and magnificent as Britain’s. A second reason, however, was that I am indebted to the British welfare state; the very one that Mr Cameron would like to replace with charity handouts. When my life hit rock bottom, that safety net, threadbare though it had become under John Major’s Government, was there to break the fall. I cannot help feeling, therefore, that it would have been contemptible to scarper for the West Indies at the first sniff of a seven-figure royalty cheque. This, if you like, is my notion of patriotism.

Yes, that IS a notion of patriotism that we like.