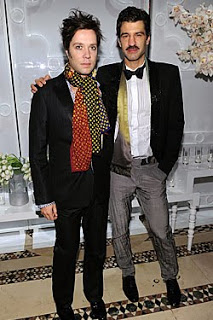 “I have been with Jorn for five years and he’s the light of my life. He’s my inspiration, support and he’s good in the sack, too! But I am very aware of living in the U.S., of the conundrum that you can’t marry your gay partner and give him citizenship. He has to apply for a green card and he may or may not get accepted, which is annoying when you’re in a committed relationship. If we were straight, we could get married and he’d get his American passport and it would make a lot of sense. I wasn’t a huge gay marriage supporter before I met Jorn because I love the whole old-school promiscuous Oscar Wilde freak show of what ‘being gay’ once was. But since meeting Jorn that all changed.” – Rufus Wainwright, changing his tune on same-sex marriage.

In 2008, Wainwright said he wasn’t a “huge supporter of marriage equality” but later backtracked somewhat, saying “a girl likes to have options.” It appears that his partner’s immigration status may have something to do with his evolving opinion.