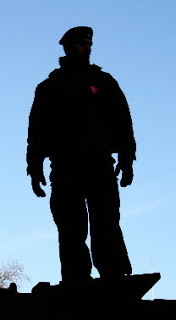 “I had a very bad session with my workout partner tonight. He is the person I am closest to in Afghanistan yet even he knows very little about my life. He asked if I was married and I lied, telling him I was divorced. Damn. I hate lying; I can count on one hand how often I have told a lie in the past 20 years. Yet if I told him I was a never-married, 42-year-old male it would have been too risky. If I told the truth I could be fired and go home to face unemployment. Why in the world would any soldier be fired for being honest? Because I am a gay soldier and it is illegal to say so. It is illegal for me to tell not just anyone in the military but anyone in the world – my parents, my siblings – even my best friend.

“Despite repeated studies by the Pentagon over the past 50 years that clearly suggest gays pose no threat to unit cohesion or morale; social conservatives insist that it is so and have passed laws demanding that gay Americans be fired if we are honest – even with our closest friends or family members. Being honest should never be illegal. This law results in gay military members being socially isolated from our peers, our friends and our families so that others will not get to know us lest they discover that we are gay. We could be turned in by anyone. It also means we cannot date anyone – even on our own time and out of uniform. So we can only keep our jobs if we lie, pretend, and remain isolated — celibate and alone. How is a law with such cruel consequences considered Christian? Lying is never good but it is the law so what else can I do? As a result of being so angry I was quiet during the workout and my gym partner expressed concern but I could not tell him why. It would have been illegal.”