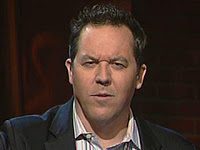 This takes the cake. Fox News host Greg Gutfield thinks he’ll be cute and turn the teabaggers’ racist table back on GetEqual.

“Now I, for one, think it’s awesome to see gay activists moving beyond the easy targets. Usually, they rag on Mormons, because they’ll take it, but ignore black churches because they won’t. So now, for once, they actually spoke truth to power. But I wonder, couldn’t this heckling be a precursor to violent extremism? And could this agitation toward our president, said to be based on policy, really be thinly veiled racism? I mean, the president did say he agreed with this gay group and yet they still heckled. Perhaps the members of Get Equal should look in the mirror and ask themselves why they’re so uncomfortable with a black man in the Oval Office. Maybe Chris Matthews could ask this question for them while Olbermann holds the mirror. But don’t hold your breath — those hecklers weren’t Tea Partiers.”

Gutfield once commented here on JMG to tell me that I was worse than Hitler, which I think is his standard catchphrase.