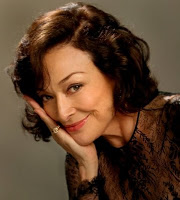 Dixie Carter, beloved by gay audiences for her portrayal of Designing Women’s Julia Sugarbaker, died today at the age of 70.

“Designing Women” actress Dixie Carter, who used her charm and stately beauty in a host of roles on Broadway and television, has died. She was 70. Publicist Steve Rohr, who represents Carter and her husband, actor Hal Holbrook, says Carter died Saturday morning. A native of Tennessee, Carter was most famous for playing quick-witted Southerner Julia Sugarbaker for seven years on “Designing Women,” the CBS sitcom that ran from 1986 to 1993. She was nominated for an Emmy in 2007 for her seven-episode guest stint on the ABC hit “Desperate Housewives.” Carter’s other credits include roles on the series “Family Law” and “Different Strokes.” She had been married to Holbrook since 1984.

Despite Julia Sugarbaker’s decidedly leftist bent, in real life Dixie Carter was a relatively far right libertarian who often spoke in support of GOP candidates. But let’s forget all that right now and enjoy a couple of classic rants from The Terminator.