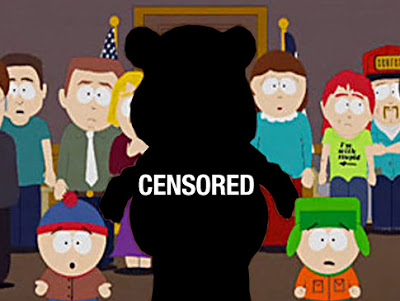 After an American Islamic extremist group issued a YouTube death threat to the creators of South Park, last night Comedy Central censored a portion of a rerun of the controversial episode.

This week Muhammad was set to appear again, but was replaced by Santa Claus in a bear suit and the word “CENSORED” was plastered over parts of the episode. Every mention of Muhammad was bleeped out. It’s not immediately clear whether this was intended to protect the show’s creators or if it was executed by them to mock the hoopla, but what is clear is this is not the first time. During the Muhammad cartoon uproar last year, the men tried to insert a picture of the Islamic holy figure into their show, but Comedy Central said no.

When Comedy Central last censored South Park over a different depiction of Muhammad, co-creator Matt Parker complained that the network had “totally fucking pussed out.”

Previous Who Will It Be?
Next Eurovision 2010: Finland’s Työlki Ellää