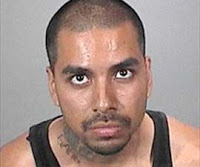 California Man Busted For Preying On Gay Men Via Craigslist California prosecutors have arrested a man they dubbed “the gay bandit” after he allegedly robbed numerous gay men he met through the M4M section on Craigslist.

A convicted felon accused of targeting gay men who were looking for dates online was charged with kidnapping, robbery, carjacking and other crimes in Superior Court Monday. Angel Pena Ayala, 24, who was on parole for a previous carjacking conviction, was arrested Friday and pleaded not guilty Monday in Torrance Superior Court, said Los Angeles County district attorney’s officials. He was charged with eight felony counts, including the allegation that the crimes were committed for a street gang.

Hermosa Beach police said Ayala placed an online ad on Craigslist.org in the personals section and met his victim at the man’s home in Hermosa Beach in March. Authorities accused him of pulling a handgun on the man and ordering him to put his TV, computer and camera into his car. Ayala is accused of ordering the victim to drive to a nearby ATM and forced him to withdraw money. Ayala released the victim in El Segundo and drove off in the man’s car, which was found abandoned in Los Angeles, said Sgt. Robert Higgins. Investigators identified Ayala through fingerprints from the recovered vehicle. He is also charged with committing a similar crime in West Hollywood four days earlier. Alaya told investigators he committed as many as three crimes a night, said Hermosa Beach police and prosecutors.

Police suspect that many victims have not come forward due to the sexual angle of the crimes.