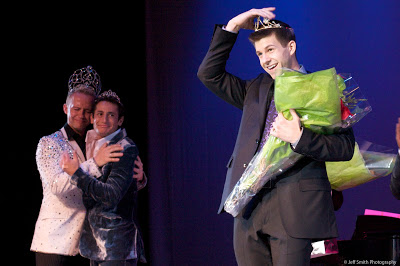 PHOTO: Broadway Beauty Pageant winner Charlie Williams of Memphis accepts his tiara as verklempt past winners Marty Thomas and Frankie Grande look on. The Ali Forney Center fundraiser played to a packed house at Symphony Space on Monday with celebrity judges Charles Busch, Tony winner Christine Ebersole, and Michael Musto providing Idol-esque commentary. The evening was hosted by four-time Tony nominee Tovah Feldshuh. JMG staff photographer Dr. Jeff provides a fantastic slideshow at the bottom of this post, which may be slightly NSFW due to the swimsuit portion of the contest.

-Idina Menzel, Kristen Chenoweth, and Neil Patrick Harris have supplied tracks to Glee: The Music, Volume 3 Showstoppers, which will be released on May 18th.

-David Hyde Pierce will receive the Isabelle Stevenson Award at this year’s Tonys for his charity work on behalf of Alzheimer’s Disease.

-Law & Order’s Chris Noth will star in the 2011 revival of Born Yesterday. The play first opened in 1946, with Madeline Kahn starring in the 1989 revival.

-Tony winner (and beyond fabulous) Beth Leavel will perform with a cast of stars on May 17th at Broadway Unleashed, a benefit for Sean Casey Animal Rescue. Bernadette Peters and Chita Rivera are scheduled to speak.