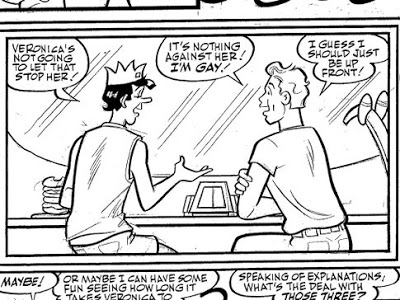 After running for 69 years, the venerable Archie comic has added a gay character.

“We’re trying to reflect society and we’re just trying to show Riverdale is a diverse place,” says Dan Parent, the artist-writer behind the series. Kevin Keller makes his debut in September in “Veronica” No. 202, on sale in September, as a hunky new kid who catches the raven-haired vixen’s eye. Though Veronica is used to getting her way, she’s finally run up against a boy who’s immune to her charms. Cue the hijinks. Parent says he hopes the positive message will offend as few people as possible, but adverse conservative reaction “was not a reason not to do the story.” Archie Comics Co-CEO Jon Goldwater said in the few hours since the official announcement his voice mail has been overwhelmed with messages – mostly in support of the company’s decision.

Freepers react:
-Wow, those faggots are really taking over.
-An extremely marginal and diseased viewpoint.
-Giving the Arabs yet another reason to seek nuclear weapons…
-Maybe the new character will get himself some JugHead.