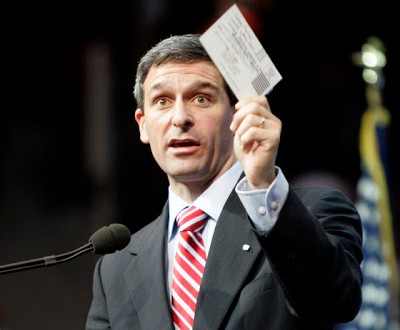 Virginia Attorney General Ken Cuccinelli has announced that he will be suing the federal government to block the implementation of the health care reform bill in his state.

Cuccinelli has long said he was examining the legal issues and suggested he would likely file suit. Brian Gottstein, a spokesman for the office, said this afternoon that a lawsuit is now a definite. Gottstein would provide no details of the legal rationale for such a suit, indicating the process is “still being worked out.” Virginia last week became the first state in the country to pass a state bill declaring it illegal for the government to require individuals to purchase health insurance, a key part of bills under consideration on Capitol Hill.

Cuccinelli is also following the teabagger claim that the “deem and pass” tactic of approving the bill is unconstitutional.

Previous The Pit And The Pendulum
Next Out Like A Lamb