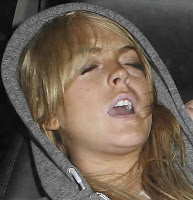 Lindsay Lohan is suing E*Trade for $100M, claiming that the “milkaholic” baby in their new ad is a violation of her name and personality. You see, the milk-addicted baby is named Lindsay. The drug-addicted Ms. Lohan says that since she’s now as famous as any other one-name celebrity such as Cher or Madonna, nobody can use the name Lindsay ever again.

Lohan alleged that online brokerage’s use in the ad the girl, also named Lindsay, improperly invoked her “likeness, name, characterization, and personality” without permission, violating her right of privacy. In her lawsuit filed Monday in a Nassau County, New York state court, the 23-year-old actress sought $50 million of compensatory damages and $50 million of exemplary damages. She also demanded that E*Trade stop running the ad and turn over all copies to her. Lohan’s lawyer Stephanie Ovadia did not return requests for a comment. An E*Trade spokeswoman declined to comment, saying the New York-based company had not reviewed the complaint. A copy of the complaint is available at www.tmz.com . The New York Post reported the lawsuit earlier Tuesday. It said Ovadia maintained that Lohan has the same “single-name” recognition as celebrities like Oprah Winfrey and Madonna.