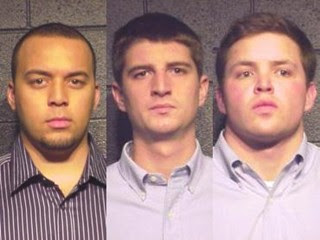 In January I told you about Daniel Hauff, the Chicago gay man who fended off three homophobic attackers on Chicago’s public transit by falsely telling them he was HIV-positive. Hauff had come to the defense of a gay kid whom the men had been harassing and was beaten and called a “faggot” for intervening. Yesterday all three men were indicted on hate crimes charges.

Kevin McAndrew and Benjamin Eder, both 23, and Sean Little, 21, all of Evanston, originally faced misdemeanor battery charges stemming from the Jan. 10 incident. Those charges were dropped and the three were immediately re-arrested as they left court on Feb. 24., police said. On Wednesday, the three men were each indicted on one count of hate crime and two counts of aggravated battery, according to Cook County State’s Attorney’s office spokesman Andy Conklin. The men will appear for arraignment on March 26.

Little, Eder and McAndrew were riding the CTA Red Line train when Little allegedly began verbally harassing and shoving a gay youth, according to a release from the attorney for Daniel Hauff, a Rogers Park man who tried to intervene. At that point, Little allegedly began directing anti-gay slurs at Hauff and pushed him. Eder and McAndrew, who had been watching, joined in the assault, calling Hauff a “stupid faggot” and all three began punching Hauff’s face, bloodying him in front of train passengers, according to the release.