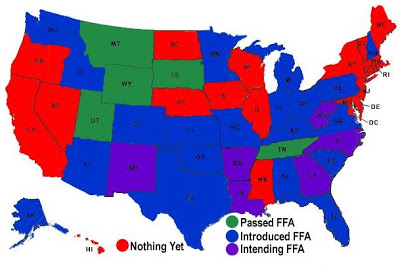 The Tenther movement scored another victory today when South Dakota declared that it had exempted itself from federal gun control laws. Via World Net Daily:

A fifth state – South Dakota – has decided that guns made, sold and used within its borders no longer are subject to the whims of the federal government through its rule-making arm in the Bureau of Alcohol, Tobacco and Firearms, and two supporters of the growing groundswell say they hope Washington soon will be taking note. South Dakota Gov. Mike Rounds has signed into law his state’s version of a Firearms Freedom Act that first was launched in Montana. It already is law there, in Tennessee, Utah and Wyoming, which took the unusual step of specifying criminal penalties – including both fines and jail time – for federal agents attempting to enforce a federal law on a “personal firearm” in the Cowboy State. According to a report in the Dakota Voice, the new South Dakota law addresses the “rights of states which have been carelessly trampled by the federal government for decades.” “As the federal government has radically overstepped is constitutional limitations in the past year or so, an explosion of states have begun re-asserting their rights not only with regard to firearms, but also in shielding themselves against government health care, cap and trade global warming taxes, and more,” the report said.

The Tenthers are named for the Tenth Amendment to the U.S. Constitution, which declares that the states have sovereignty over any issue not expressly mentioned in the Constitution. Tenthers are using that amendment to fight for exemptions to federal laws covering health care, abortion, LGBT rights, hates crimes, and a myriad of other issues.