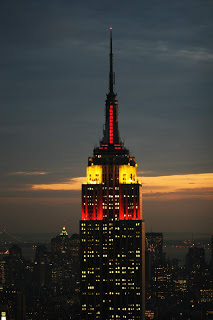 Despite security guards and the ten-foot fence, yesterday a man managed to leap to his death from the observation deck of the Empire State Building.

A young man took a fatal plunge from the 86th-floor observation deck of the Empire State Building on Tuesday night, crashing down on W. 34th St. and horrifying pedestrians, police said. The jumper managed to get past the 10-foot-high spiked fence ringing the observation deck and then disappeared below the outermost ledge around 6:15 p.m., police sources said. He landed with a sickening thud on a sidewalk along W.34th St., near a bank branch at the northeast entrance of the famed midtown skyscraper. “He came down in front of the Bank of America. Boom! It was an explosion,” said Luis Mosquea, 28, who was manning the front entrance of a women’s boutique on W. 34th St., across from where the man landed.

Despite its status as the most famous skyscraper in the world, only 34 people have jumped to their deaths since the ESB was completed 76 years ago. Because of formidable barriers at the top, most of those people achieved their ends by jumping out of the windows of lower floors. The Golden Gate Bridge, which opened about the same time as the Empire State, has been the location of over 1300 suicides and is considered the “most popular” place in the world for jumpers. Someone once told me that almost every person jumps from the Golden Gate on the side facing the city. He thought that had deep meaning, I thought they just wanted one last look at San Francisco.