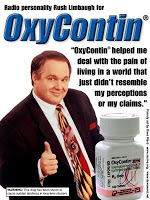 My guess in even in Canada and even in the UK, doctors have opted out. And once they’ve opted, they can’t see anybody Medicare, Medicaid, or what will become the exchanges. They have to have a clientele of private patients that will pay them a retainer and it’ll be a very small practice. I don’t know if that’s been outlawed in the Senate bill. I don’t know. I’ll just tell you this, if this passes and it’s five years from now and all that stuff gets implemented — I am leaving the country. I’ll go to Costa Rica.

Ah, Costa Rica, where the tropical winds blow as easily as the Oxycontin flows.

Previous Where Things Stand
Next Today In Frivolous Lawsuits