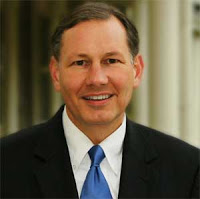 Today the Pennsylvania Senate will vote on a ban on same-sex marriage. The bill is sponsored by anti-gay GOP Sen. John Eichelberger.

The Pennsylvania Senate Judiciary Committee is expected to vote Tuesday on legislation that would seek to strengthen a 1996 marriage law in Pennsylvania. The legislation, sponsored by Sen. John Eichelberger, R-Blair County, proposes to add these 20 words to the state constitution: “Only a union of one man and one woman shall be valid and recognized as a marriage in this Commonwealth.” Previous attempts to advance a constitutional amendment on this topic through both chambers of the Legislature have failed. To amend the constitution, identical bills have to pass the House and Senate in two consecutive legislative sessions before it goes to voters to make the final decision. Supporters of this proposal said a constitutional amendment would prevent a court from overturning the state law that defines marriage as between a man and a woman, as has happened in other states.

UPDATE: The ACLU reports that the bill was not passed.

The Pennsylvania Senate Judiciary Committee today voted against legislation to amend the state constitution to ban same sex marriage. The American Civil Liberties Union of Pennsylvania hailed the vote as a victory for the lesbian, gay, bisexual, and transgender community in the commonwealth. Senate Bill 707, introduced by Senator John Eichelberger of Blair County, was tabled by an 8-6, bipartisan vote of the committee. Although Senate rules allow the bill to be considered again at any time, Legislative Director Andy Hoover noted that it is unlikely that the bill will be brought up before the end of the 2010 legislative session.