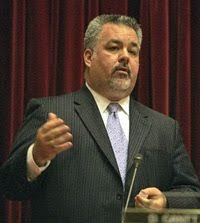 Openly gay NY Assemblyman Danny O’Donnell, who is widely credited with his chamber’s multiple approvals of same-sex marriage, is considering a run for the seat of beleaguered Rep. Charles Rangel (D-NY). Today the 20-term Rangel resigned as chairman of the powerful House Ways and Means Committee over allegations of ethics violations. Via Elizabeth Benjamin at NY Daily News:

If elected, O’Donnell would be the first openly gay member of the state’s congressional delegation. O’Donnell noted all but one ED of his district is located within Rangel’s district and pointed out that he has lived on the same block for more than 20 years. He also has a connection north of his district, which ends at 125th Street, having served on Community Board 9 for seven years prior to his election to the Assembly in 2002. I asked O’Donnell how long he has been considering a run for Congress. He replied that he gave some hard thought to his future when he was interviewed by Gov. David Paterson last year for the US Senate seat Hillary Clinton was vacating.

“I like legislating,” O’Donnell said. “I don’t want to be public advocate. I don’t want to be borough president…I like being a legislator, so it would be a great honor to be a member of the congressional delegation.”

“…If you told me when I got here in 2003 that I would be interviewing for a US Senate seat I would have told you to take your medication and call me in the morning,” the assemblyman continued. “But the world has changed.”

As longtime readers of the blog know, I am a HUGE fan of Danny O’Donnell. It would be a shame to lose his voice in the state Assembly with marriage equality still in play, but his years of work there on the issue have probably safely secured its passage again on future votes. We don’t know where this Rangel mess is headed, but I like the idea of Danny O’Donnell in the wings. I like it a LOT.