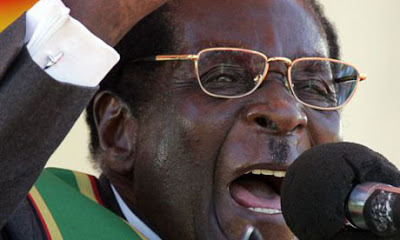 Zimbabwe president Robert Mugabe is blocking the addition of LGBT rights to his nation’s new constitution.

Mr Mugabe was quoted by the state-owned Herald newspaper today as saying: “That issue is not debatable, it’s not up for discussion. “Those who engage in homosexual behaviour are just crazy. It’s just madness. Insanity. We can’t do it or the dead will turn in their graves.” Zimbabwe’s prime minister Morgan Tsvangirai agreed with the president. He said: “Women make up 52 per cent of the population… There are more women than men, so why should men be proposing to men?” Mr Mugabe has previously described gay people as worse than “dogs and pigs” and claimed that homosexuality is “un-African” and a “white man’s disease.” Sodomy is illegal in Zimbabwe, although gay couples are rarely prosecuted and gay groups are usually allowed to continue operating.

Zimbabwe is creating a new national constitution under a power-sharing deal with several parties.