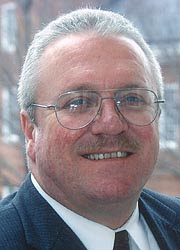 Maryland state Delegate Anthony O’Donnell and his GOP counterparts in the state Senate want to reverse the recent decision to recognize out of state same-sex marriages. In fact, they say that overturning the ruling is an emergency matter of public health.

House Bill 1532 and Senate Bill 1120 Contains False Assertions About Protecting Public Health Or Safety. This bill contains statements that are just plain insulting. Section 3 of the bill actually says that “this Act is an emergency measure, is necessary for the immediate preservation of the public health or safety.” It is absurd that Delegate O’Donnell believes that by providing enhanced protections to committed, loving couples we are somehow creating a public health emergency. There is no emergency, and nothing in these bills would do anything to protect public health or safety. State recognition of the marriages of same-sex couples performed in other jurisdictions harms no one. For example, New York does not license marriages of same-sex couples, but that state has recognized marriages of same-sex couples for six years without harm to anyone.

You can support Equality Maryland here.