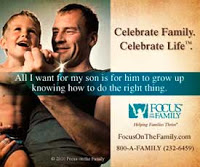 Focus On The Family Vs. NCAA Focus On The Family is furious that the NCAA was pressured into removing their display ad from its website.

This Focus on the Family ad, believe it or not, has been yanked off the NCAA (National Collegiate Athletic Association) website for one simple reason: Focus on the Family supports natural marriage, believing that marriage is the union of one man and one woman. The NCAA, who apparently believes only in selective diversity – “Christians need not apply” – has censored this ad after homosexual activists complained. Look at the message again. By scrubbing this ad, is the NCAA saying we want our sons to grow up knowing how to do the wrong thing? With the number of NCAA athletes who get in trouble with the law every week, you’d think the NCAA would enthusiastically support a message which urges fathers to be great role models for their sons and athletes-to-be. Are NCAA officials saying that they celebrate divorce rather than intact families? That they celebrate death instead of life? That they don’t want fathers to be involved with their sons? What is remotely objectionable about the message in this ad? NCAA officials even went so far as to say that even if the message was okay, they’d have to spike it because of the messenger.

Your own last line is your answer, Focus. When you’ve spent the last 30 years literally demonizing tens of millions of Americans, don’t look so fucking shocked when others want nothing to do with your bigoted asses.