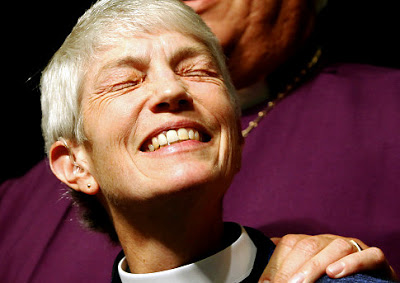 Rev. Mary Glasspool has been named the second openly gay bishop of the Episcopal Church.

A majority of bishops and dioceses of the Episcopal Church have approved the election of the church’s second openly gay bishop, the Rev. Mary D. Glasspool, a decision likely to increase the tension with fellow Anglican churches around the world that do not approve of homosexuality. The worldwide Anglican Communion, the network of churches connected to the Church of England, has been in turmoil since the Americans elected their first openly gay bishop, V. Gene Robinson, in New Hampshire in 2003. Theological conservatives in the Communion say the Bible condemns homosexuality, while liberals say the Scripture is open to interpretation. Bishop Glasspool, 56, is to be consecrated as one of two new assistant bishops, known as suffragan bishops, in Los Angeles on May 15. Both elected suffragan bishops are women — the first ever to serve in the diocese.

In October of last year, the Pope invited Anglicans to join the Catholic Church if they were disgusted with open gays and women in the pulpit. The Freepers are already losing their shit over Glasspool’s promotion. A sampling:

-“A God scorned will unleash the fury of hell!”
-“It is the new American plan. The Gays take over the church, and the Marxist take over the government.”
– “Lucifer must be laughing has ass off.”
– “Mary Cesspool — the dyke version of Vikie Gene Robinson.”