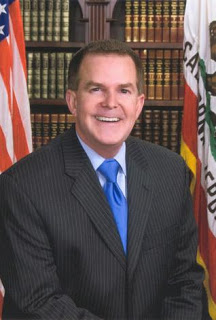 COLLUSION: People Knew Roy Ashburn Was Gay And They Said Nothing At least two California newspapers and the openly gay mayor of West Sacramento knew anti-gay state Sen. Roy Ashburn was gay and yet they said nothing. On Wednesday, Ashburn was arrested for DUI while leaving a Sacramento gay bar in the company of as yet unidentified man.

Last summer an editor at Ashburn’s hometown paper, the Bakersfield Californian, heard that a Sacramento paper was about to out him. So they called him and asked him point-blank if he is gay.

His response: “Why would that be anyone’s business? Including The Californian’s? “I think there are certain subjects that are simply not relevant and this is one of them. It has no bearing on the job I do.” During the course of our conversation I listed several instances in which a politician’s sexual orientation, or even just their sexual activity — straight or gay — would be relevant. If Ashburn were a staunch anti-gay activist but was secretly gay, I said, that would be a legitimate concern to his constituents. Ashburn agreed but said he didn’t believe he had been such an activist. I pointed out he had voted conservatively on gay issues throughout his career. Yes, he said, but he’d done so on almost all social issues. He represents a conservative district and votes as his constituents would want him to, he said. Several political organizations have ranked Ashburn’s voting record as extremely unfriendly to gays. (I’m not sure where those organizations rank Senate Majority Leader Dean Florez, a Democrat, who initially voted against all gay issues for much the same reason, but since has turned a new leaf.) And Ashburn did organize a “Traditional Family Values” rally in 2005 to drum up support for a state constitutional amendment banning same-sex marriage.

The Californian decided that Ashburn’s sexuality wasn’t “relevant.” The unnamed Sacramento paper apparently did too and never published. To recap: It’s not relevant that a state politician with a 100% rating from an anti-gay group is gay himself. Can you fucking BELIEVE that? And it turns out that the openly gay mayor of West Sacramento has known about Ashburn for a long time.

Christopher Cabaldon, the openly gay mayor of West Sacramento told KOVR he has spotted Senator Ashburn at gay hot spots a number of times. According to Project Vote Smart, Ashburn’s has consistently voted against gay rights legislation including no on recognizing out of state same-sex marriages, no on creating a state recognized Harvey Milk Day, and no on expanding anti-discrimination laws. “To live a secret life and at the same time be attacking the people who you’re one of but are too ashamed to admit, that’s hypocrisy,” said Cabaldon to KOVR CBS 13.

That hypocrisy apparently didn’t bother Mayor Cabaldon enough to actually fucking say something. And you know that if Cabaldon knew, many other queers in Sacramento knew. If I lived in West Sacramento, I’d want to have a long angry talk with my mayor.

At this moment, I’m not so interested in the detestable Roy Ashburn and his pathetic defense of “I was voting the way my constituents wanted.” Because to my mind, the biggest story here isn’t Ashburn’s closeted homosexuality and anti-gay voting record. As we all know, that is a story we have seen a hundred times. And will see a hundred times more. The REAL story here is the media’s collusion and the conspiracy of silence on the part of our own people. Folks, when you know somebody is actively working day and night to thwart the rights of your FAMILY, of your PEOPLE, you fucking say something.