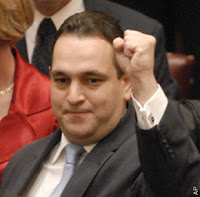 In response to Fight Back New York’s campaign to thwart former NY Sen. Hiram Monserrate’s return to office, the convicted girlfriend slasher has proudly announced that he’s been endorsed by anti-gay religious groups in Queens.

Monserrate announced he’s being supported by a bunch of clergy who are praising him for his support on one particular issue: same-sex marriage. Specifically, his opposition to it. The clergy members announced their support of Monserrate in response to a a pro same-sex marriage P.A.C. that is trying to oust Monserrate. “We find their tactics to be offensive and disrespectful,” said the Rev. Andy Torres, in a statement sent out by Monserrate’s campaign. “Their overall goal supporting Gay Marriage is contrary to our moral principles. We unequivocally support Monserrate in the special election as a legislator who will defend our position.” A more nuanced position was expressed by Gilbert Pickett, another church spokesman. “Monserrate has supported many gay groups that provide services in this community for years but did not vote for Gay Marriage. He should not to persecuted by rich gay outsiders for his vote of conscience which is consistent with church values.”

Monserrate betrayed the Empire State Pride Agenda last year by voting against same-sex marriage after telling ESPA in writing that he supported them. The special election to fill his seat takes place on March 16th. Visit Fight Back New York for information on how to donate or volunteer to support LGBT friendly candidate Assemblyman Jose Peralta. Turnout for the election is expected to very low, so all help will be critical to the result.