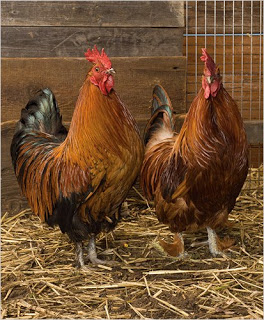 This weekend’s feature article in New York Times Magazine deals with homosexuality in the animal kingdom. Here’s an excerpt:

Various forms of same-sex sexual activity have been recorded in more than 450 different species of animals by now, from flamingos to bison to beetles to guppies to warthogs. A female koala might force another female against a tree and mount her, while throwing back her head and releasing what one scientist described as “exhalated belchlike sounds.” Male Amazon River dolphins have been known to penetrate each other in the blowhole. Within most species, homosexual sex has been documented only sporadically, and there appear to be few cases of individual animals who engage in it exclusively. For more than a century, this kind of observation was usually tacked onto scientific papers as a curiosity, if it was reported at all, and not pursued as a legitimate research subject. Biologists tried to explain away what they’d seen, or dismissed it as theoretically meaningless — an isolated glitch in an otherwise elegant Darwinian universe where every facet of an animal’s behavior is geared toward reproducing. One primatologist speculated that the real reason two male orangutans were fellating each other was nutritional.

In recent years though, more biologists have been looking objectively at same-sex sexuality in animals — approaching it as real science. For Young, the existence of so many female-female albatross pairs disproved assumptions that she didn’t even realize she’d been making and, in the process, raised a chain of progressively more complicated questions. One of the prickliest, it seemed, was how a scientist is even supposed to talk about any of this, given how eager the rest of us have been to twist the sex lives of animals into allegories of our own. “This colony is literally the largest proportion of — I don’t know what the correct term is: ‘homosexual animals’? — in the world,” Young told me. “Which I’m sure some people think is a great thing, and others might think is not.”

Wingnut logic: Homosexual acts are not natural! Then why do so many animals do it? What are you, an ANIMAL? Well, yes.