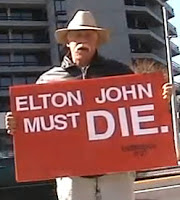 Two days ago infamous Georgia nutcase Neil Horsely was arrested for making death threats to Elton John over his comment that Jesus Christ was gay. Today Jim Burroway at Box Turtle Bulletin reports that Horsely is also responsible for a campaign in Kenya that calls for the death of homosexuals.

Horsley is not only calling for Elton John’s death, but we have learned that he is also the operator of a Kenyan site known as ProjectSEE. That web site is responsible for placing posters written in Swahili in parts of Kenya containing photos and identifying information for LGBT people, and encouraging Kenyans to follow the Levitical law calling for their death. The anonymous blogger GayUganda received an email from an American in Kenya saying that ProjectSEE is placing posters in the Rift Valley area of Kenya: First, it explicitly encourages the broad public posting of images of individuals, with a Swahili translation that basically advocates their harm through a Swahili Leviticus ‘quote’ that says death is in order. Encouraging these postings in a place like Kenya presents a very real and potentially harmful threat to their targets. Secondly, they have put individual faces and in some cases contact information on the posters, placing some people at potentially immediate risk. Third, this campaign and website appears to be organized and financed by U.S. citizens based on U.S. soil.

This morning I got a call from amFAR’s NYC offices and after putting them in touch with Jim Burroway, amFAR has issued the following letter to the CEO of Horsely’s internet host Go Daddy, demanding that they take down his vile website.

I am writing to make a specific complaint regarding the website www.projectsee.com which is in clear violation of GoDaddy.com terms of service. In section 5 under the heading “NO UNLAWFUL CONDUCT OR IMPROPER USE,” it states: “Except as set forth below, Go Daddy may also cancel Your use of the Services, after thirty (30) days, if You are using the Services, as determined by Go Daddy in its sole discretion, in association with spam or morally objectionable activities. Morally objectionable activities will include, but not be limited to:

The website in question clearly shows the names, phone numbers, and emails of individuals whom the authors believe should be targeted in their home country of Kenya. This very personal attack constitutes a direct threat to the safety and well-being of these individuals and is morally reprehensible. Were the individuals Americans, and targeted in the US, this would constitute a clear violation of US law. It is my sincere hope that Go Daddy will take immediate action to remove this website.

The proprietor of this website is one Neal Horsley. Mr. Horsley was arrested on March 10, 2010 in Atlanta, Georgia for making a threat on the life of the entertainer Elton John. The story can be found at this link. It may sound hyperbolic to state, but people’s lives in Kenya are in immediate danger. Time is of the essence. Go Daddy must act with expedience if this injustice is to be rectified before it is too late. It is my sincere hope you will see fit to act immediately.

Contact Go Daddy yourself and request that this murderous site be taken down at once.