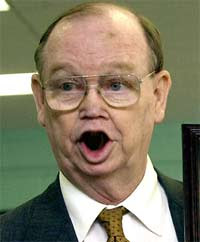 Wildmon, 72, said Wednesday his resignation follows months of health problems, including hospitalizations for treatment of encephalitis, which he got from a mosquito bite, and cancer on his left eye. Wildmon told The Associated Press in a telephone interview that his son, Tim, is expected to lead the ministry. Don Wildmon said he will continue to work at AFA, but not in a leadership role. “I just figured the time has come. I’m still in rehab learning to walk again. My mind is not working the way it used to, if it ever did,” he said with a laugh. Wildmon, a retired Methodist minister, founded the group in 1977 in his Tupelo home as the National Federation for Decency, promoting family values and waging boycotts to combat what it deemed pornography and violence on television and in magazines. The group changed its name in 1988 to the American Family Association. It has grown to an organization with a $20-million budget, 180 radio stations, a monthly magazine with a circulation of 170,000 and an internet presence of more than 2 million supporters, AFA said in a news release.

A devout Christian might wonder why God smote Wildmon with both eye cancer AND a crippling brain disease. An uncharitable person might wonder if all those decades of seething hatred didn’t brew up Wildmon’s cancer. A militant homofascist blogger might thank that mosquito.