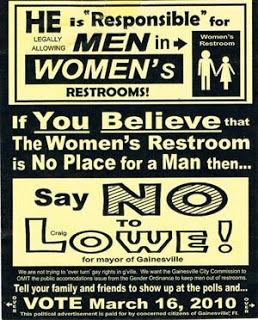 The Concerned Citizens of Gainesville are smearing openly gay mayoral candidate Craig Lowe by posting placards claiming that his support for the city’s recently passed transgender rights ordinance means he is pro-pedophilia. Via Equality Florida:

Last year, when anti-LGBT forces tried to repeal Gainesville’s Human Rights ordinance, Craig Lowe served as Chair of the successful campaign to stop the repeal of these hard won legal protections. Now Craig is poised to become the first gay mayor of Gainesville and the anti-gay forces are targeting him with outrageous attacks. Craig is the most experienced candidate, having served on the Gainesville Commission since 2003. During his time on the commission Craig led the way in passing a Domestic Partnership Registry and an inclusive non-discrimination ordinance. Craig is running a strong grassroots campaign and he’s going to need our help to emerge as the winner in a crowded election.