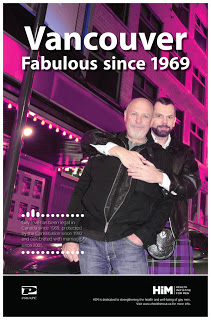 Via JMG reader BStewart23, here’s a poster from a new campaign by the Vancouver Health Institute for Men called “Public Displays of Gay.”

HIM has a new poster campaign that is being promoted during the Olympics. The campaign shows visitors the diverse and accepting side of Vancouver, while promoting public displays of gay affection. The posters will show images of gay couples expressing affection on various street corners in Vancouver. It is HIM’s goal to put a gay couple on every street corner downtown (or at least a poster of one). Other gay guys can submit their public displays of affection on our website, so grab your camera, a friend/lover/stranger and start making out in public.

The text at the bottom of the poster reads: “Gay love has been legal in Canada since 1969, protected by the Constitution since 1992 and celebrated with marriage since 2005.”

Previous Quote Of The Day – Gary Cass
Next Caption This