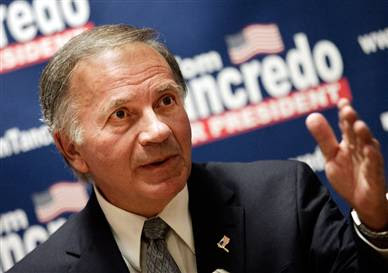 Tea Party Convention Opens In Nashville With A Racist Bang The first ever Tea Party Convention got underway in Nashville today with a speech from former Rep. Tom Tancredo in which he lamented the loss of the Jim Crow days when southern blacks had to pass a literacy test in order to vote.

In his speech Thursday to attendees, former Republican congressman Tom Tancredo invoked the loaded pre-civil rights era buzzword, saying that President Barack Obama was elected because “we do not have a civics, literacy test before people can vote in this country.” Southern states used literacy tests as part of an effort to deny suffrage to African American voters prior to Johnson-era civil rights laws. “Prior to passage of the federal Voting Rights Act in 1965, Southern (and some Western) states maintained elaborate voter registration procedures whose primary purpose was to deny the vote to those who were not white,” a website for civil rights veterans explains. “In the South, this process was often called the ‘literacy test.’ In fact, it was much more than a simple test, it was an entire complex system devoted to denying African-Americans (and in some regions, Latinos) the right to vote.”

Tancredo went on decry the multicultural state of modern America and said that it’s time for (presumably white) Americans to “take it back.”