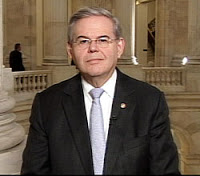 Tea Party dimwits in New Jersey are attempting to recall Sen. Robert Menendez. Even though a member of Congress has never been recalled. Ever. From the wingnut Newsmax:

Republicans’ chances to retake the Senate are limited by the fact that only a third of the chamber is up for re-election this year, but some conservative activists are pushing to force more Democrats onto the ballot in November by trying to recall them. It’s a long-shot approach, the legal hurdles are tremendous – no member of Congress has ever been recalled – and it’s limited only to states with recall laws that are broad enough to include federal officeholders. But the first test comes Tuesday, when a judge will hear oral arguments from the Sussex County Tea Party, which is trying to recall Sen. Robert Menendez, New Jersey Democrat. “Nine states, including 12 Democratic senators who are not up for re-election otherwise, could all be on the ballot with a recall,” said Peter Ferrara, a lawyer for the conservative American Civil Rights Union, which is helping the tea partiers with their case. “Given what they’re doing on health care this year, that’s just going to be a huge boost to the recall effort.” The legal obstacles are daunting. A report by the Congressional Research Service, the advisory think tank for Congress, says the Constitution does not authorize a recall and says it’s never happened.