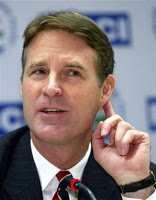 Sen. Evan Bayh (D-IN) says he will not seek reelection this fall as the list of Democrats bowing out in 2010 continues to grow.

“After all these years, my passion for service to my fellow citizens is undiminished, but my desire to do so by serving in Congress has waned,” Bayh will say. Bayh will announce the decision at a press conference later today. He was first elected to the Senate in 1998 and was re-elected easily in 2004. National Republicans had recruited former Sen. Dan Coats to challenge Bayh in 2010 although polling suggested Bayh began the race with a 20-point edge. He also had $13 million in the bank at the end of the year.

With Bayh’s withdrawal, pundits are already calling his Senate seat an “easy pickup” for the Republicans.