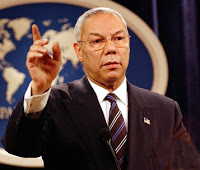 In a major reversal, Gen. Colin Powell, who opposed Bill Clinton’s attempt to allow gay soldiers to serve openly, has joined the call to repeal DADT.

“In the almost 17 years since the ‘don’t ask, don’t tell’ legislation was passed, attitudes and circumstances have changed,” General Powell said in a statement issued by his office. He added: “I fully support the new approach presented to the Senate Armed Services Committee this week by Secretary of Defense Gates and Admiral Mullen.” Robert M. Gates, the defense secretary, and Adm. Mike Mullen, the chairman of the Joint Chiefs of Staff, told lawmakers on Tuesday that they supported President Obama’s proposal to repeal the 1993 law forbidding gay men and women to be open about their sexuality while serving in uniform.