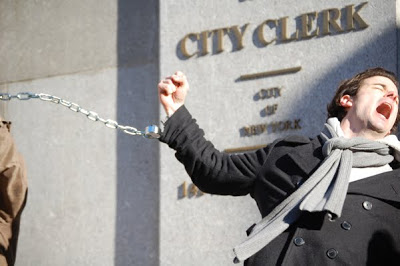 According to Queer New York, four members of the new LGBT activism group Queer Rising were arrested at this morning’s protest at the NYC marriage license bureau in Manhattan. Their statement, in part:

On Friday, February 12 from 8:00-10:00am, LGBT activist group Queer Rising lead a crowd of impassioned protestors in a Valentine’s Day action outside the new 24,000 square-foot New York City Marriage Bureau Office (141 Worth Street) to make a powerful statement in support of marriage equality for all LGBT Americans. Resulting in their arrest, Alan Bounville, Jake Goodman, Justin Elzie and Gabriel Yuri Bollag, all members of Queer Rising, performed a non-violent civil disobedience. This unprecedented protest, compared to marriage equality protests of the past, significantly raised the stakes in terms of its political organization:

· Alan Bounville, Jake Goodman, Justin Elzie and Gabriel Yuri Bollag chained and pad-locked themselves to the entrance railing, subsequently blocking entry to the marriage bureau.
· A gathering of under 100 same-sex marriage equality proponents for a press conference and rally in the park opposite the bureau.
· The application – and subsequent rejection – of over 20 same-sex couples hoping to obtain a marriage license inside of the bureau.
· The application – and subsequent approval – of a lesbian and gay man, whom according to New York State law may legally marry each other, for a marriage license.

“New York City is home to the Stonewall Riots and in that tradition we are here to say that equality doesn’t arrive through the ballot box. The bankrupt strategy of putting all efforts into electing so-called ‘friendly’ officials has failed. We must shift to building a grassroots, national movement that demands full equality by any means necessary. Today, through our symbolic marriage applications, rally and civil disobedience, that message was quite clear.

More photos at Good As You.