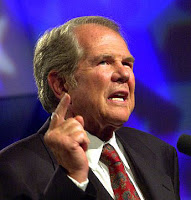 According to the former president of Liberia, televangelist Pat Robertson traded gold mine concessions there in return for lobbying the Bush administration on his behalf.

The revelations came in the midst of Taylor’s U.N.-backed trial on 11 counts of committing war crimes and crimes against humanity during Sierra Leone’s 1990s civil war. Taylor is accused of directing a Sierra Leonean rebel group, the United Revolutionary Front, in a campaign aimed at securing access to the country’s diamond mines. The rebel movement stands accused of committing mass atrocities in the West African country in the late 1990s, including the mutilation of thousands of civilians. Prosecutors at the Special Court for Sierra Leone contend that Taylor offered concessions to Westerners in exchange for lobbying work aimed at enhancing his image in the United States. They maintain that he also spent an additional $2.6 million paying lobbying and public relations firms to influence in his favor the policies of former presidents Bill Clinton and George W. Bush. Under cross-examination, Taylor said that Robertson had volunteered to argue Liberia’s case before U.S. officials and that he had had spoken directly to Bush about Taylor. He also confirmed that Robertson’s company, Freedom Gold, signed an agreement to exploit gold in southeastern Liberia, but that it never generated any profit.

Robertson has long been condemned for his investments in African diamond mines whose overseers abused and defrauded workers.

Previous Oliver North: Repealing DADT Will Lead To NAMBLA In The Military
Next Tea Party Convention Opens In Nashville With A Racist Bang