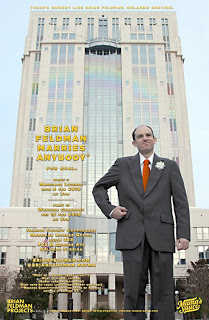 As a Valentine’s protest against anti-gay marriage laws, heterosexual Orlando performance artist Brian Feldman announced that he would randomly marry any woman who happened to show up at the Orange County Courthouse this past Monday. Three women appeared! Therefore, having filed the paperwork and paid the license fee, Feldman will marry one Hannah Miller on this Friday. From the Facebook event page:

Is this entire project a mockery of marriage? Not at all! It’s completely within the legal rights of Brian and any other heterosexual couple with $123.50 (plus $6 for a standard marriage certificate). Sound absurd? Not nearly absurd as denying the equal right to marry for same-sex couples who truly care about each other; who’ve been in committed, productive and, most importantly, loving relationships for upwards of 20+ years. That, to Brian, and millions of Americans who believe in lesbian, gay, bisexual and transgender equality, is truly absurd – to say nothing of a civil injustice.