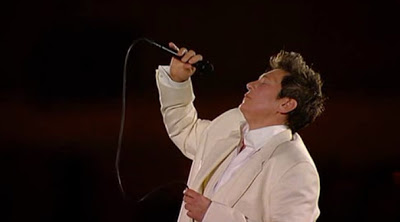 Despite the preceding three hours of high-tech spectacle, it was openly lesbian and native Canadian kd lang’s simple, yet soaring take on Leonard Cohen’s Hallelujah that stole the show during the opening ceremonies of the Vancouver Olympics. Watch video here. Overnight the top three searches on Google were for various punctuations of lang’s name, as accolades poured out on the world’s blogs and news sites. Twitter reactions here. Last night was the second time in two weeks that Cohen’s classic was sung to a global audience by an openly gay performer, as Matt Morris had dueted on the track with Justin Timberlake during the Haiti telethon. It was lang’s second Winter Olympics performance, 22 years ago (during her cowgirl schtick period) she performed Turn Me Around at the 1988 Calgary games.