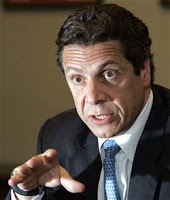 NY Attorney General Andrew Cuomo, a presumed (but not yet declared) 2010 gubernatorial candidate, will headline a fundraiser for Brooklyn state Sen. Carl “Closet Case” Kruger, who was one of the Hate Eight Democrats who voted against marriage equality. Not uncoincidentally, Kruger is the chairman of the powerful Senate Finance Committee.

Is there a time when our allies will ever say, “You know what? I am for marriage equality and I think it is a bottom line civil right. My campaign will never morally support any human being who is opposed to it.” Instead of espousing such a moral stance, Attorney General Cuomo is helping the homophobic head of the Finance Committee sell tickets at a good ol’ price of $9,500 per ticket. Isn’t politics grand?

Cuomo has publicly stated his support for marriage equality.