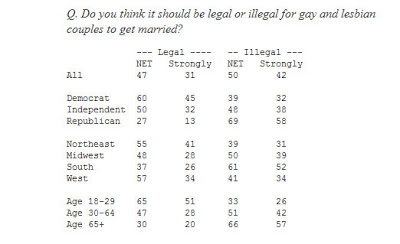 While a new poll shows the public support for marriage equality remains unchanged, support for civil unions is growing.

In a new Washington Post-ABC News poll, 47 percent say gay marriages should be legal, with 31 percent saying they feel that way “strongly.” Intensity is stronger among opponents, however: overall, half say such marriages should be illegal, including 42 percent who say so strongly. Civil unions draw broader support. Two-thirds now say they favor allowing gay and lesbian couples to form civil unions that would give them many of the same legal rights as married couples. That’s an increase of 12 percentage points since a December 2007 poll that asked about civil unions for “homosexual couples.” In the new poll, support for civil unions is at 50 percent or better across party and ideological lines. Support for such arrangements is now 15 points higher than it was a few years ago among conservatives; it’s up 13 points among Republicans.

Views on gay marriage are little changed since Post-ABC polling last touched on the topic, in April 2009. Then, 49 percent said they thought it should be legal, 46 percent illegal. In that poll, a wording experiment found little difference between support for legal marriages of “gay and lesbian couples and for those among “homosexual couples.” (A CBS News/New York Times survey released yesterday conducted a similar experiment and found the wording did make a difference in their results.)