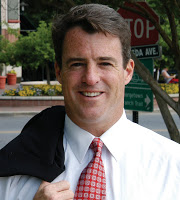 Maryland Attorney General Douglas Gansler issued an opinion today saying that the recognition of same-sex marriages from other jurisdictions is consistent with Maryland state law. This is an amazing development coming just days away from same-sex marriage become legal in Washington DC. From Lambda Legal, via press release:

Statement from Susan Sommer, Director of Constitutional Litigation at Lambda Legal: “This opinion should bring some peace of mind to married same-sex couples and their families in Maryland as this state aligns itself with New York, in making clear that there is no gay exception to long-standing marriage recognition law. The Big Apple didn’t topple after New York recognized out-of-state marriages of same-sex couples – far from it – and many families in Maryland just got more stability. Under well-settled law, a marriage valid where entered is valid in Maryland, even if the couple could not have married in Maryland. Unfortunately, this important step is only part of the story. Same-sex couples who reside in either New York or Maryland still have to leave home to get married, and they are as vulnerable as ever to discrimination in other states and by the federal government. These half-steps are helpful, but not enough – we need marriage equality for same-sex couples.”

Lambda Legal provided the Maryland Attorney General’s office with the legal background for today’s opinion, including details of their work in New York state which has the same policy. Susan Sommer also testified before the Maryland legislature in the successful bid to thwart a bill that would have blocked today’s decision.