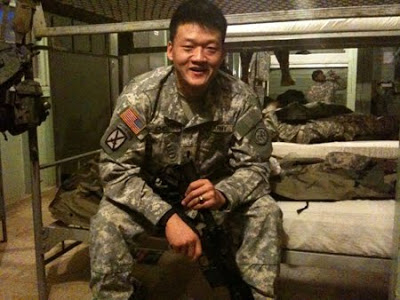 Bilerico reports that Lt. Dan Choi, the nation’s most famed victim of DADT, is back on his post. Bilerico’s Jeff Sheng has the details:

I spoke to Lt. Choi at length earlier about what exactly the situation is. Apparently, Lt. Choi’s commander has always been in full support of him, and even after Lt. Choi came out on The Rachel Maddow Show, his commander did not press for his discharge. The military did eventually serve Lt. Choi a discharge notification – essentially firing him from his job, but he was allowed to fight this at trial, and as it currently stands, the discharge has not been finalized. Given the current state of how DADT is in such flux, and also, in my opinion, the prominence and celebrity of Lt. Choi, his discharge might never be fully enforced. There was a part of me that was very heartened by this news, and that we definitely can take this as a sign of more progress on the repeal of DADT.

Fantastic news, of course, even if this may mean that the movement has lost its most passionate and skilled orator on the issue.