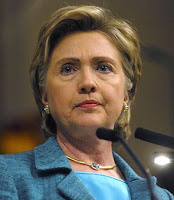 A lawsuit has been filed with the Supreme Court charging that Hillary Clinton is ineligible to serve as Secretary of State because as a Senator she had voted to increase the salary of the position she now holds. The litigants claim that vote, made in 2007, is forbidden by an arcane clause of the U.S. Constitution. Before Clinton was confirmed, Congress passed a resolution returning the Secretary of State salary to its pre-2007 level, but that wasn’t good enough for the wingnuts.

The suit was filed by Judicial Watch, an extreme right wing group that hilariously describes themselves as a “non-partisan American educational foundation that promotes transparency, accountability and integrity in government, politics and the law.” Judicial Watch, which has already been laughed out of a lower court, brought the suit on behalf of Foreign Service Officer David C. Rodearmel, a 19-year State Department employee who says that Clinton took the job illegally and therefore he is not obligated to obey any of her commands.

Don’t hold your breath for SCOTUS to actually hear the case.