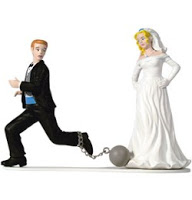 The Kansas House has approved a “covenant” marriage bill which will make divorce much more difficult to obtain for couples who have agreed to such a union.

Language creating the option was added Thursday to a bill on common law marriage. The House gave the bill first-round approval. Proponents say the option would strengthen marriages in Kansas. Couples choosing covenant marriage would have to receive premarital counseling and sign an affidavit stating their intentions. Opponents say the law would force couples to stay in relationships that may be harmful. Arkansas, Arizona and Louisiana already have covenant marriage laws.

It goes without saying who the proponents of covenant marriage are.

Previous Molotov Mitchell: I Have Gay Friends
Next Quote Of The Day – Donald Trump